Michal and I first met in the winter of 2013 during the Snowball music festival in Winter Park, CO. As many of you already know, he’s very approachable. We had a short conversation in which I mentioned seeing him several years earlier at the Gothic theater when his laptop crashed mid set. As I recall, he violently threw the laptop to the floor then addressed the few of us that were there saying something like, “I guess that’s the end of my set,” before angrily walking off stage. We laughed about it and that was that.

Fast forward one year later when my good friend Ginger Perry introduced me to Brian Lindgren, AKA, Mux Mool down at One-Up on Colfax, where Michal and Mux were doing their “Club Scouts” show. This was right around the time I first started hearing about Super Best Records. I was also beginning to take a much more serious approach to my music production. Introductions were being made and doors were opening so I pitched the 10 songs I had completed to Brian, who then put me in touch with Michal. Next thing I knew, I’m releasing my debut album, Flying High Above The World, on Super Best Records. Michal brought me along on his 2016 mountain run with The Pretty Fantastics at which time he had given me a few loops to work with, which he had made in Ableton. One of which ended up becoming the chorus to “Big Booty Bomb”. All this history and we never had a true collaboration, however. Not until “Snowblind”.

The thing that excites me most about this song was that it wasn’t technically a collaboration. It was me getting to produce Michal Menert on vocals in the studio to a song I had produced entirely on my own. This is why I am always humbled when I hear this track. To think that Michal trusted me enough to do this is a great honor. When recording, we did one vocal pass with him singing in the octave of the song then another pass with him singing an octave below. We then mixed the two together. I think it gives the vocals a natural but subtle distortion.

Other then the intro section, which I sampled from Lamont Dozier’s, “Prelude & Rose”, the track is entirely original. It was actually written around my guitar lick at the 0:54 and 2:30 mark. I was doing some E minor Dorian noodling over the rhythm but wasn’t sure where to take it. I had another 4 bar loop in the same key I had priorly shelved and I ended up putting the two pieces together. This became the “verse” section. I then added the intro and what became the chorus to round out the arrangement.

I knew right away I wanted vocals but thought some saxophone would fit well and reinforce the vibe. That’s when I was introduced to Nicholas Gerlach. We met over at Tyler Unlands studio where we recorded, had a quick conversation regarding the track, then got to work. Nick knew exactly what I was looking for. He was definitely one of the most professional artists I’ve worked. Especially for not having known him. I can’t really describe the feel he set with his solo but the notes he plays and the space he allows just make the whole section breathe. I remember the first time hearing it all put together, the words “mind rain” popped into my head for some reason. We had these other outtakes that I used for the outro solo. I remember I was trying to create this layered effect between Michal’s vocal hook and Nick’s saxophone. I first introduce the vocal then bring in the sax before fading the vocal out completely leaving just the saxophone, then I fade out the rest of the song. It pretty much wrote itself.

My favorite part of this song might just be the *sigh* you hear Michal make into the microphone right before the saxophone solo begins. It gives me this intimate feeling of truth that I relate with.

I reached out to Michal to get his take on the lyrics he wrote specifically for this episode. Here’s what he had to say:

“I wrote the lyrics touching on the feeling of being lost in the snowstorm of time; seeing the world spiral out of control & away from familiarity, while the reflection in the mirror starts looking more like a stranger. It is the realization that so much of our life starts to run on autopilot as we age, that eventually it feels like we’ve walked blindly into the heart of a storm with no idea of what direction we’re facing anymore.”

Memories change when those close have told lies

So tired and I can’t see the road, I’m snow blind

On my own wandering alone through the smoke cloud

calm my nerves when the world seems beyond absurd

Kept going even knowing we were wrong at first

Controversy reflecting the recklessness we suppress and

collective sense of direction we lack in our current essence

a wave of death & depression

I’m letting it go walking ahead into the storm clouds

Blinded by the snow trying to find my way home now

It’s got me feelin’ Snowblind 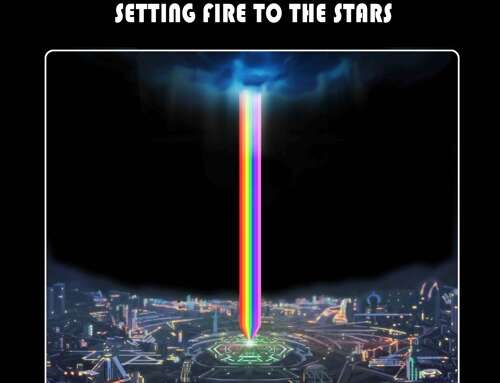